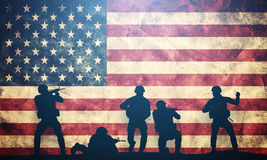 Last week I went to a veterans dinner here at Harbor Ridge. It seems this has been a long standing annual tradition for the Marines in this enclave. This year they opened it up. Not through all inclusiveness per se but they were running out of old leathernecks to attend. It was an fascinating evening.There were actual tanks and Jeeps at the door. Probably from some museum although you never know what is going on here behind closed garage doors. How did they get those things past security? Participants ranged from their thirties to their nineties. There was a slide show of sorts from various members who submitted photos. I did not.

I couldn’t help but think of all the veterans, many of whom had gone to war and the hours, days and years we have all given up in service to our country over all these years. Most notable was a 93 year old who gave a stirring talk. He had been at the Battle of the Bulge and had become a prisoner of war. Couldn’t hold a candle to this buck private. And there he was in a natty shirt and blazer. He like all of us had answered the call whether it was a sense of duty or your friendly draft board that summoned you.

Yesterday I went to Hospice orientation. By some miracle of guile I made it through the background checks and yet I am still worried because they took a full set of fingerprints. I looked around the room at a group, both young and old. Probably from mid 20’s to mid 70’s. All ready to help. I thought they should also be thanked for their service.

In “pondering the imponderables” I wondered why we and so many others volunteer? Mine is simple. I used to tell Father Mike that this might be my only chance to get extra credits to allow me to sneak past St Peter unnoticed.

As a nation we count around 60 million of our fellow travelers who give of their time at no cost. Everything from food banks, meals on wheels, tutors, mentors, blood donors, board members, builders and thrift shop entrepreneurs, to name a few. That is a huge number but still only 25% of the adult population. Are they special and does the other 75% just not care? That is not accusatory but observational and worthy of consideration.

Several studies have been done. It seems first and foremost is that some say volunteering isn’t cool. We see stereotypical pictures of do gooders and in a fascinating way we say we cannot relate to them. They are old. They are dorks. They are not of my ilk. They have nothing better to do with their time. Mine is valuable.

Another aspect is that many are unsure of what they can do. Successful people don’t like to look stupid or pedestrian. If you need a CEO or CFO or someone with a doctorate in nuclear physics I am your man or woman. Otherwise as they say on Shark Tank, “I am out.”

The time factor seems daunting except for one fact. A majority of volunteers today are between the ages of 30-60. In their prime, they have kids and demanding jobs and yet still find a few spare hours on weekends or whatever. Some would be volunteers will argue they can’t stick to a fixed schedule. Almost every organization can tailor to one’s spare time.

Other than my Catholic guilt as one harsh critic told me once, I thought about what is it that makes me want to help? They say much of your proclivity to charity is a result of what your parents taught you. As a kid I remember going over to shovel the elderly Mrs Cook’s driveway after a snow storm. It wasn’t a suggestion from my mom but a very gentle command…and don’t you dare take any money from that poor lady. Not exactly enthusiastic, I did my duty to God ,country and of course my mother.

I guess you have to have an innate empathy for others. When you see someone in trouble you can’t look the other way. Many years ago, dashing down the stairs to the PATH at the old World Trade Center, I happened upon a man siting on the floor with blood all over him. The poor devil had slit his wrists in front of the waning commuter crowd. No one had stopped to notice or if they had, they decided they had more important things to do.

I wrapped a handkerchief around his wounds and asked another guy to find a Port Authority cop. I tried to calm him until help came. Riding home on the train after that I was stunned that no one stopped to help. Was I overly virtuous? Hell no, I was just being a human being. It was an automatic response. Why had so many chosen otherwise? Dunno.What would you have done?

Some people are beyond exemplary. Everyday you have good Samaratins who risk their lives to save another human being. Invariably they brush adulation aside when confronted afterwards. You have Doctors Without Borders who get in harms way with no compensation. You have soldiers who are on their umpteenth tour to a war zone. A donor of a kidney to some unknown person. These are the real heroes.

There are cops and firemen, teachers, nurses, social workers, soldiers, sailors and airmen and the like who serve with compensation but probably not nearly enough. Think of all the people you and I don’t notice who make our world a better place. Think of waiters and waitresses, bussers and landscapers, janitors and delivery people. When you stop and just look around your little burg or fiefdom the number is astounding.

This is not a call to action. That would be haughty on my part. But for me, just cogitating

says upon introspection that maybe I should do more.For all of those  60 million plus and beyond I just want to say thank you for your service. I owe you a lot. We all do

.As always,
Ted The Great

Psychologists can demonstrate volunteering helps you look outside yourself and your problems, allowing you to see the world and other people from a whole different perspective. Might be that endorphin thing or that you are not as bad off as you thought. Works for me.

A study by the Journal For Philanthropy noted that a survey among wealthy people showed more that half said that volunteering rather than just writing a check did more for underprivileged people.

One statistical reason people don’t volunteer is they are not asked. This is both wealthy and poor. We tend not to ask clients, fellow workers or friends. We feel we are intruding. We assume less fortunate people have no desire to better their surroundings. Not true at all.

On a percentage basis Utah,Idaho and Minnesota lead the pack with over 35% participation. The bottom are Florida, Nevada, New York and Louisiana which are at or below 20%. Best city, Salt Lake City. Worst Miami.

Correction: Last week in my “Numbers”blog I stated that 15% percent of the town of Sutherland Springs had been killed. Of course a numbers man pointed out to me that the 26 murdered was 6 percent of the population which would have meant only 40,000 in Denver and 540,000 in New York would have died by extrapolation. Thank you Neil. Did anyone else notice that?