We are ensconced in our new home in Florida for the Xmas season. If current forecasts hold true it will be 83 on Christmas Day. A little difficult to dream of sugar plums lest they melt all over my bald head. A blazing hearth? Not exactly. 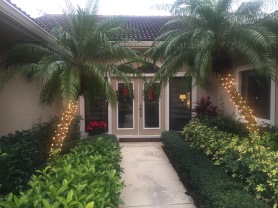 We do have a glorious tree in the main club house. We put wreaths on our front door and our palm trees are festooned with little white lights. Our house tree, albeit fake, is sitting pretty in the window. The local tree lots are under tents and I can only picture it being a little hot and steamy in there. So what are we to do?

A couple of things strike me. Let’s concentrate on singing and giving. We had a “Bring a Gift” dinner at the club last week replete with the Jensen Beach High School Glee Club. Now JB is not what you would call a booming metropolis so the fact that they could garner 30-40 teens for the fete is somewhat remarkable. The fact they were so good was downright amazing.

The guys were outnumbered 3 to 1 but they made up for it with their spunk. They came in wearing white tie and tails of a sort. The young ladies were dressed in long gowns. There were three or four soloists who sang form the heart and were awesome. As I watched the kids I just saw friendship and a song so sweet. Their director did a masterful job and the ensuing bravos and ovations were more than deserved. How does this goodness happen in our crazy world or is the converse the way it should be?

Kathy was treated to a performance of a different sort. She was one of the ringleaders to assemble gift bags for the Hope Rural School in Indiantown about twenty miles and light years away from us. The big red bags of gifts donated by our members were brought to our garage over a week or so. Then some staff and members brought them by truck to their destination on Wednesday.

The Hope School is amazing, accounting for education of both kids and parents in what can best be described as a migrant town of sorts. The parents work in the fields and their kids are left to two nuns who make this thing work, They cover the three R’s but also family nutrition and a little bit of social graces thrown in.

They put on a show for Kathy and her crew and each child and parent came up and said thank you with those dark eyes looking straight into hers as they shook hands. When she got home she was on cloud nine as to what she had witnessed. And that’s a good thing.

Our community is probably considered upper crust by many but not by ourselves. We take charity seriously and in addition to this effort we raise money for a bunch of things from United Way to Hospice to Safe Place, a home for battered women. It really blows you away as to the number of people that not only write checks but get involved as volunteer workers and board members. Who cares whether we are the 1% or 10% it is more than a sometime thing and pretty neat to be part of. I am not trying to brag but we just don’t hear enough about this side of the coin very often.

This whole giving thing is downright rewarding. Since our kids are not here you really don’t have much to do on the shopping lists side. Thank God the Divine Miss K has no real interest in jewelry. Of course one of my daughters will give you,”No Bling No Ring” What can I say? But you do think about little things you can do for people. I looked up generosity and it involves the spirit of giving. The synonyms are generous, ,magnanimous, unselfish, unsparing. Very cool. Antonyms: cheap, parsimonious, penurious, stingy, tight, tightfisted. I guess that pretty much sums it up.

Long story short is that it is really contagious. At first people will look at you with a wary stare with arms tightly folded tightly. “Buzz off TTG. My charity is my own private business.” Then they slowly warm to the idea and say, “What the hell?” Soon after they are in the thick of it and loving it. It is that simple.

There you have it. This year’s message: Music and Charity. Pretty simple The results: Priceless. I am now in the mood.

Merry Christmas to all!!!

As always
Ted The Great 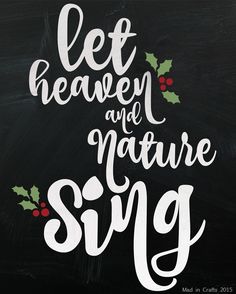 There were wreaths placed on over 1.5 million deceased soldiers graves this year. The wreaths themselves were to a large part assembled and packed by volunteers. Truck drivers, many working on their own time brought them to cemeteries all over the country.

In 2014 Americans gave over $360 billon to charity. Roughly 3/4 of that was given by individuals. Approximately 25% of the population volunteers their time. 20% more women than men. The highest incidence of helping comes from 35-44 years olds. The more education you have the more you are prone to volunteer.

There are choirs, glee clubs and singing groups in every community throughout the US. I once took a course at University of Denver called, “Find Your Voice”. Way out of my league it was still a ball. I even had to sing solo in the middle of the class. I survived. 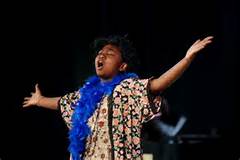 Singing is good for you. It releases endorphins, battles depression, anxiety and loneliness. The average shower stall has perfect acoustics to produce a reverb effect that will make you sound great. Enjoy.

One thought on “In The Mood….”