marks are the bane of my existence and at the same time the fire in my belly. I guess feel if I ain’t searching then I am not really alive. This week has been fraught with them. The woulda’s, coulda’s and shouldas that permeate our psyches after such an incredibly senseless tragedy.

Whether you are a student at Marjory Stoneham Douglas High School or a parent you play the tape over and over, hitting rewind again and again. We hope and pray the results will come out differently until we finally accept the harsh realities of life. Then we have investigations and studies. I think in some way to soothe our consciences. You know, at least we tried to be better. We still don’t know why? 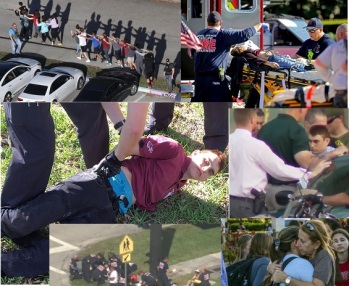 9/11,Columbine, Sandy Hook, Orlando, Vegas. We could have just cued up the “Never Again” tapes from all of them. Have we made any progress? In a manner of speaking. Airports, ball parks, office buildings, places of government are all hermitically sealed from the bad guys. I guess that is an improvement to some but it feels like a regression to me. We have not eliminated the disease but just learned how to live with it.

I have thought a lot about the gun thing. Several friends of mine have guns for hunting and protection. That’s fine but to a man they could not find any valid reason for an assault rifle or high capacity magazines. I could get crazy about it but to what avail? We have well over 300 million guns in our country. At least 2% are high capacity weaponry. That’s over 6 million. Even if you banned them now there would still be that many out there. How can we create any sort of sense of ease in our schools, malls or homes?

I got to thinking about the NRA. They are no different from Congress when it comes to their estimation of the will of the people or their members. Screw’em, they don’t understand. A majority of NRA members are for tighter gun control legislation. That’s not the message I am getting from the top. We have taken the second amendment that was enacted when we had muskets and morphed that into the right to conceal carry 45’s or open carry AR15’s. Really?

Moving down my list is my total disbelief at the senator from my new state of Florida, Marco Rubio. Don’t worry he is one of many that will look you straight in the eye and say the fact that he has received over $3.5 million from the NRA has absolutely no effect on how he votes? I am not the sharpest pencil in the drawer but please don’t try my patience on this one. As it relates to our elected representatives they are complicit. If not on guns then on banking or oil and gas or whatever.

One of the big takeoffs after our latest tragedy has been the swing to mental health as the culprit. Yes, this young man has had a very dysfunctional life over the last few years. But so have a lot of other people. Let’s assume for a moment that everyone who has issues could be a potential killer. Stats will tell you at any given point in time there are 10% of our population, or about 35 million of our fellow Americans who suffer some sort of mental illness. Forget about the cost, how in God’s name can we find facilities and staff to man them for those types of numbers? And then how can we instill in these tainted ones the gumption to continue treatment?

As in everything else we want someone somehow to provide the magic bullet. We will find a drug that cures all. Perhaps Virtual Reality to Artificial Intelligence is the way to Nirvana. I’ve got it! We will just find everyone who is not right and bring them in. Then we can find the most well adjusted person in the world if there is one. We can clone them or better yet use 3D printing to replicate the perfect brain and install it in our troubled brethren. We can do it laparoscopically on an out patient basis. Man, am I good or what?

This is not reductio ad absurdum. Crisis rears its ugly head every day of our lives. It is not the bane but the nature of our existence. From the shooter to the student to the teacher to the parent to security guard to the FBI, life in a way is not pretty. Or at least not without its ups and downs. I happen to believe it is the nature of man or woman as imperfect beings.That neither dooms us to a life of despair nor guarantees success.

And that is my final question to myself and to you. Parkland is a high end town. If not the top 1% at least the top 3 or 4% hang put there. So money didn’t really provide security. Our whole ethos is under question. What are our supposed values and do we really have the interest and the guts to live up to them? That school is about 50 miles south of us but it feels beyond close to me.

I am blown away by the kids not only here but throughout America. There is an inkling of a sea change. Do they have the wherewithal and persistence to carry on? I really hope so. They have caused me to question a lot of things How about you?

As always
Ted The Great

Investigations (asking questions)are part of our national canvas from train wrecks, to 9/11. Some are useful (Watergate) and some are just fishing expeditions. Some are window dressing. The results are many times critical and therefore watered down. Over the Congressional history there have been over 1500 committees to provide the structure. Unfortunately there are too many overlaps to arrive at useful conclusions and if they are there they are rarely acted upon.

There are over 13,000 lobbyists in DC. There is upwards of $4 billion currently being spread over 535 members of Congress. Unless I missed my math that is about $7.5 million per. Now of course that money has nothing to do with the way they vote

The NRA has around 5 million members. It holds safety and gun education thought the country. With approximately 1.4% of the population of America it is considered one of the top 3 most influential lobbying groups. As far as money spent the top five are the US Chamber of Commerce,National Association of Realtors American Medical Association, American Hospital Association and the Pharmaceutical Manufacturers of America.

A study was done by professors from Princeton and Northwestern after accumulating some 20 years of data. The opinions of the lower 90% of wage earners have little or no effect on the decision makers.
Duh!

One thought on “Question Marks….”