Fionn Fereira, Susan Boyle, Nathan Patterson. If these names don’t appear household to you, don’t be ashamed. Each of these undiscovered people happened upon fame under the unlikeliest of circumstances. They came out of nowhere to win fame, fortune and even a contract or two. 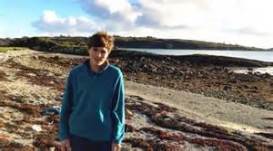 Fionn Fereira, hails from a remote town in Ireland. This teenager was walking on an isolated stretch of beach and happened upon a rock covered with all forms of plastic. With limited resources he researched what is a problem worldwide, microplastics. All by his lonesome and with no testing facilities, he developed a procedure to fitter water and won the Google Young Scientist Award of $50,000. He will be studying chemistry at the University of Amsterdam this year.

Susan Boyle was the rather dowdy woman in England, who left Simon Cowell on Britain’s’s Got Talent with his jaw just millimeters from the floor with her rendition of “I Dreamed a Dream” from Les Miserables.

Producers thought she was mentally ill and she was admitted to a psychiatric hospital for three days after her performance. Silly boys. She just celebrated the 10th anniversary of her career.

Nathan Patterson was just goofing around with friends at a Colorado Rockies game. The have a cage there where you can throw a baseball to see how fast you can toss the horse hide. I once hit 45mph. Nathan hit 97 mph and his feat was recorded and seen on You Tube. It got him a contract with the Oakland A’s farm team.

Science, entertainment and baseball are not remote fields. There are people everywhere culling through data and tryouts looking for the next wunderkind. Yet these were not found. It got me thinking about both the process and the world itself. Are there undiscovered Einsteins, YoYoMa’s, and Nolan Ryans everywhere? Is it a matter of luck or a selection process that is not bad but leaves out so many? Good questions TTG.

In sports the experts deem someone too small, or their mechanics too faulty to make in the Bigs whether football, baseball hockey or what ever. Maybe it begins even earlier?

Does a Mom or Dad consider their child too uncoordinated or aggressive enough to warrant the special attention among their other brothers or sisters ? Ditto trying to get into the chorale or AP courses. You will hear a parent describe their child as a nice kid but not exactly the sharpest knife in the drawer. Yikes!

I have a brother who we believe was and is dyslexic.Nobody knew about it back then.  I remember my dad doing battle to get him to finish high school. Yet he is a McGyver type who given a situation can figure out some ingenious way to solve the problem. He has always loved fire engines and pumps of all sorts. In high school in mechanical drawing class he would design fire apparatus but back then there was no real outlet for his talent. It has been a tough road for him. Should not have been.

We rank kids by IQ’s, SAT scores, and who knows what else. The methodology is impersonal to the core but given the vast numbers of prospects, it is somewhat understandable. When law firms, med schools or Wall Street come a calling, they always target the “best” schools. That’s fine but are there so many others out there who perchance are even more qualified?  Is there any possibility that the professors at Podunk University  or a local community college, are doing a better job of preparing their students for expertise in a profession as well as life itself? Interesting question.

It goes beyond the educational field. How many times are very smart and innovative people buried in the bowels of some large corporation. As you get further up the management chain you are plagued by two things. First is you do not want to rock the boat, especially when you make the boss look bad. Secondly you don’t want to any young Turk making you look bad. You see it in business, non profits and even in our social sectors.

I personally hate mediocrity whether it be corporate, religious, my community or myself.

You have often heard me cry in dismay at the “Why change, we have always done it that way” directive. It is that reluctance to try anything new or accept that maybe there is a different way to look at things that makes us stale and prone to obsolescence.

As I look back over the many years I am fascinated by companies that had it all figured out only to fall by the wayside by more nimble competitors. IBM owned the computing world. This team or that were best in their league. Network TV was the only act in town. Macy’s was everybody’s place to shop. Bear Sterns, Lehman Brothers et alia. The Catholic Church? Who knows maybe Amazon or Google will suffer from the same blight?

Point being is simple. Look at people and things around you. Don’t dismiss them by color or sex or nationality. Don’t sell your kids or your spouse short. Don’t look askance at a new and sometimes revolutionary idea.  The world has enormous amounts of talent. Do you want to utilize it or get run over by it? I know my answer.

JJ Watt and Michael Strahan were walk ons in college.

2 thoughts on “World’s Got Talent”