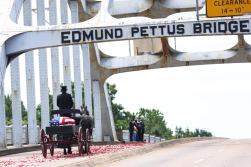 The sight of John Lewis’s body on the horse drawn caisson as it crossed the Edmund Pettus Bridge was poignant. The loop was complete. He and others had accomplished a lot over many years…..peacefully.  It clearly brought to mind the difference between non violent and violent protest. Are they equally successful? Interesting question.

The reason for protest is simple. You don’t like something and you want to change it. You might have written to your congressman or signed a petition but those things sometimes take on an air of irrelevance in today’s world. You get the attention of the media by the size of the crowd or the ferocity of its anger. That’s showbiz.

Go back to the 60’s and it was everything from civil rights to Vietnam.

There was the ugliness of Kent State and serenity in the March on Washington. Hippies made “Love not War” and it was hard to discern a true cause from a happening. Blacks achieved a reaffirmation of their rights and peaceniks probably were the final blow against the presidency of Lyndon Johnson. Some worked. Some didn’t.

I am amazed at the strength of commitment on several fronts. I watched a special on PBS about woman suffrage.

That was forty years of protesting. They stood outside the Whites House throughout an entire winter without much cover. They were not going away and their presence ate at Woodrow Wilson day after day. He finally caved.

The Civil Rights movement stretched well over ten years of careful planning and maneuvering that culminated with the “I have a dream” speech. No matter what your political affiliation MLK, John Lewis and Ralph Abernathy were heroes. To come up against well armed and hateful cops and stand your ground as they beat the crap out of you without even flinching is a testament to courage and determination.

Gandhi, Mandela, the Arab Spring accomplished more than anyone could imagine. As I look at these it is not a matter of whether I agree or not but the value of a leader who can be profound in the face of a much more well equipped force. They seem to inspire by common sense and eloquence rather than vitriol. Where are the leaders today?

The people of Hong Kong are another great example. These weren’t radicals or trouble makers but rather everyday folk, young and old that could not stand to see their beloved city and what it stood for plowed under by Beijing. Unfortunately they made a tragic error by taking over the university and defiling public buildings. It provided Xi all the cover he needed.

In today’s world, high tech can get a crowd in a matter of hours. The media loves an uprising and you get air time. But then what do you do? When the Occupy Wall Street was the cause du jour I walked down to the capitol in Denver to see what was up? I was disappointed. I sought out who was in charge. Couldn’t find one. I asked what they were protesting about? No one could define that. I went back home shaking my head that several hundred people could spend three or four weeks in tents with no outcome in mind. I must have missed something.

The current BLM protests have me scratching my head too. George Floyd’s death was horrific. You would be hard pressed to find any sane person who did not see it as tragic and unwarranted. It made you sit up and take notice. It wasn’t a city or country wide response but a worldwide one. Then it turned ugly.

There is no way you can condone burning down police stations, turning over cars or shooting people. You have the right to congregate not obliterate. 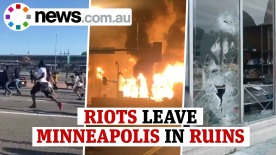 Looters are not protesting but are making a quick hit.  People decry the police tactics but for a moment picture yourself in a squad car in the middle of a mob. You may be in riot gear but your opponents are throwing projectiles, fireworks and Molotov cocktails at you. Are you supposed to smile gently and say, I understand? Please feel free to break windows and set fires to decent people’s businesses. We will just call that collateral damage.

Have your tactics won me over or turned me off? I want to fix the system not overthrow it. Give me a reason to back you not lock you up. The people say it is the few that cause trouble and not the majority. Hmm. Don’t we make that same argument about good and bad police? The danger is the movement morphs from better treatment of black people into a laundry list of what’s bugging you now.

An article in the New Yorker a few years back listed the criteria for a successful protest:

I would add #5.  Did you make more enemies than friends? If you are violent you lose a supporter here. I admire the likes of John Lewis. Politics are important but it is a decent and good man or woman I will vote for every time. Unfortunately today, there aren’t a lot to choose from. C’est la guerre.

Protests can be a march, sit in, boycott, writings, or song, Your First Amendment rights enable you to congregate as long as you do not block traffic on a sidewalk, street or entrance to a building.

The bigger the better. George Floyd protests have numbered in excess of 20 million people worldwide. 2017 Women’s March had over 4 million. The Million Man march drew 800,000.  March for Life has been protesting abortion for 46 years and numbers up to 500,000. The MLK March on Washington in 1963  brought 250,000 to the mall in Washington,DC. Over 3,0000 press representatives covered it. 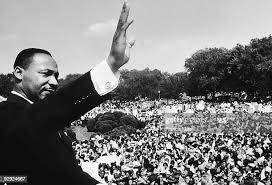 21 trains from all over the country converged on DC for the MLK March. Thousands of busses. President Kennedy was against it and thought it would turn into a riot. Just 4 people in all were arrested. Someone sabotaged the sound system. The Army Signal Corps got it working again. An 82 year old rode his bike from Ohio. Plain golf just wanted to be there. It can be done.

“The lady doth protest too much, methinks” is a line from the Hamlet. It is spoken by Queen Gertrude in response to the insincere overacting of a character in the play. The phrase is used in everyday speech to indicate doubt concerning someone’s sincerity.